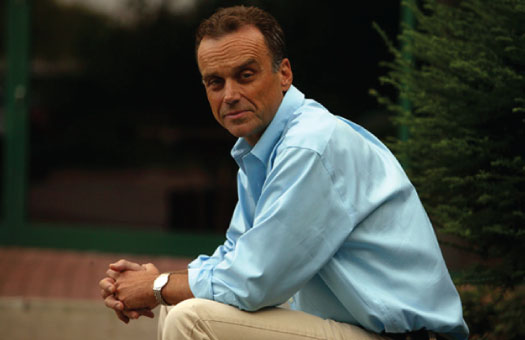 Andrew Nagorski is an award-winning journalist and author who spent more than three decades as a foreign correspondent and editor for Newsweek. He is the author of several history books, most recently The Nazi Hunters, which gives a historical account of the individuals who refused to allow Nazi officials to fade into the woodwork when WWII ended. Instead, they foudn them in hiding and brought them to trial.

Faith Aeriel had the chance to interview Nagorski about The Nazi Hunters.

Q. What motivated you to write this book when there are already so many books on WWII?

A. As a foreign correspondent for Newsweek, I was stationed in places like Berlin, Moscow and Warsaw, which meant I frequently found myself reporting on issues related to World War II and the Holocaust .  But two things really prompted me to write The Nazi Hunters.

First, I realized that the era of the Nazi hunters is coming to a natural end because soon there will be no more Nazi war criminals still living. For that reason the story of the hunters and the hunted can now be told almost in its entirety, which meant I could write a book spanning the whole postwar era. It felt like the perfect time to see what the Nazi hunters accomplished and what they failed to accomplish, and to sort out myth from reality.

There were books earlier about various parts of this story, such as the Mossad’s kidnapping of Adolf Eichmann in Argentina, but very few that tried to tell the whole story. In my book I show how seemingly unrelated events were connected in more ways than most people realize, and how they forced the Germans, Austrians and others to confront the darkest chapters in their history. And even how they forced the United States to admit that it allowed many war criminals into the country after World War II.

Second, I am always fascinated by how individuals with deep convictions shape the course of history, and I have no doubt that the Nazi hunters did exactly that. At a time when much of the world wanted to forget the horrors of the Third Reich, they dedicated their lives to keeping the memory of what happened alive—and to demonstrating that every individual has a moral responsibility for his or her actions. It is never an excuse to simply say, as almost every Nazi in the dock did, that “I just followed orders.” This is an issue that is certainly still relevant today.

Q. What research was involved in writing this book?

A. As a reporter, I always want to talk directly to the people I’m writing about if at all possible. In this case, quite a few of the Nazi hunters and the hunted are no longer around. But I was lucky in that I had interviewed someone like the late Simon Wiesenthal, the most famous Nazi hunter, many times while covering stories like the search for Auschwitz’s “angel of death” Josef Mengele and the whole controversy about the wartime past of former UN Secretary-General Kurt Waldheim while he ran for the Austrian presidency in 1986. So in this and other cases I had a head start with the research.

But some of the most remarkable characters in my book are still alive: people like Benjamin Ferencz, who at age 27 was the chief prosecutor in what the AP called “the biggest murder trial in history” in Nuremberg; Beate and Serge Klarsfeld, the at times recklessly daring German-French Nazi hunting couple; Rafi Eitan, the Mossad agent who was in charge of the commando unit that kidnapped Adolf Eichmann in Buenos Aires in 1960, among others. I travelled to Germany, France, Poland and Israel, along with reporting in the United States, to conduct such interviews. In some cases, I found family members or co-workers of the hunters who died long ago who could shed light on their personalities and background.

I also mined everything I could from various memoirs, books and documents in a variety of archives and collections, to find the kind of personal stories about both the hunters and the hunted that, I hope, readers will find engaging and illuminating.

Q. A high school history class is unlikely to discuss any Nazi officials other than Hitler. To what extent were others involved in the coordination of the Nazi Party and the actions that were carried out in its name?

A. It is a huge mistake to pin everything on Hitler. Of course he was the driving force, and there is no doubt he was the tyrant who was responsible for mass murder on a scale that is hard to comprehend. But huge numbers of people were responsible for making that mass murder happen on a daily basis. It was not only the top Nazi officials who were involved but everyone from the members of special killing squads that rounded up and murdered Jews and others in the early days of the war to the guards and other personnel in concentration camps. One of the major subjects of my book is the question about who was guilty for such crimes, how many people were working for this apparatus of death, and what does that say about their level of personal responsibility.

Q. What constitutes a war crime?

A. There are a variety of international conventions and norms that define a broad array of war crimes. For instance, intentionally targeting, murdering and torturing civilians constitute a war crime. Similarly, the execution and torture of POWs is a war crime. Anyone arguing that there were no known standards of wartime behavior during World War II is propagating a complete myth.

Q. Why did the Allies, as you say in the introduction, largely abandon their efforts to bring Nazi officials to trial?

A. The initial drive to make Nazi war criminals pay the price for their deeds quickly gave way to the urgencies of the Cold War.  As the world split into the Soviet and the Western camps in the late 1940s, each side was far more interested in recruiting German scientists and maintaining popular support for new governments than in keeping up the difficult work of investigating and trying war criminals.

Q. Why did it take nearly two decades after the war ended for the Frankfurt Auschwitz Trial?

A. In Germany after the war, no one was eager to dwell on the horrors of the Third Reich. In West Germany, people were anxious to rebuild their economy and participate in the new democratic order, and they did not want to be confronted with their recent history. It took someone like Fritz Bauer, a German judge and prosecutor from a secular Jewish family, to have the courage to revive the push to hold Nazi criminals responsible for their actions. Bauer, who had survived the Nazi period in exile, believed that such trials were an absolute necessity; otherwise, millions of people could continue to avert their gaze from what had been done in their name.

Q. What authority did these Nazi hunters have? Were they working for government agencies or on their own?

A. Some, like Wiesenthal and the Klarsfelds, were in essence freelancers. They worked independently, trying to track Nazi criminals and expose their deeds, thus pressuring governments to take legal action. Others like Bauer and Polish investigating judge Jan Sehn or Eli Rosenbaum of the U.S. Justice Department’s special unit, had an official role representing government agencies that could prosecute, deport or extradite war criminals.

Q. The summary on the inside cover of the book concludes with this quote: “At first, the Nazi hunters wanted revenge, but soon their story was transformed into a relentless struggle for justice.” What is the difference between revenge and justice?

A. There is a huge difference. I write early in the book about the initial acts of vengeance, when former concentration camp prisoners turned on their former captors, for example. Even someone like Benjamin Ferencz, the young U.S. Army prosecutor in Nuremberg, admitted that his first instinct was to seek revenge when he saw the appalling scenes at the newly liberated concentration camps.

But then many people quickly realized that, while it was impossible to punish all or even anything like most of those who were guilty, they could hold trials that would both document their crimes and reinforce the principles of what constitutes unacceptable behavior under any circumstances.

Q. Were the Nazi hunters successful?

A. If you mean were they successful in bringing all those to justice who should have paid for their crimes, the answer of course is “no.” But they did bring far more people to justice than anyone expected after the first round of postwar trials quickly ended and most of the world wanted to forget about this whole enterprise.

Q. You conclude the introduction of The Nazi Hunters with the following thought: “Most Nazi hunters, along with the hunted, will soon only exist in our collective memories, where myth and reality are likely to become even more intertwined than they are today.” As years continue to pass and WWII sinks deeper into history, why do you think it is important that the events of the war aren’t forgotten?

A. First of all, as so many of the Nazi hunters I profile repeatedly stressed, we owe this to their millions of victims. Then there’s the question of what lessons humanity draws from those horrors. Assuming we do not allow them to be forgotten, one of the key lessons is how accountable each of us should be for our actions. In future conflicts, no one should be able to say that what I’m doing is okay simply because someone ordered me to do it, or my country or terrorist group demanded it. Those international norms about war crimes and basic human rights have to mean something. Otherwise, as the saying goes, we risk being doomed to repeat the history of the mid-20th century again and again.