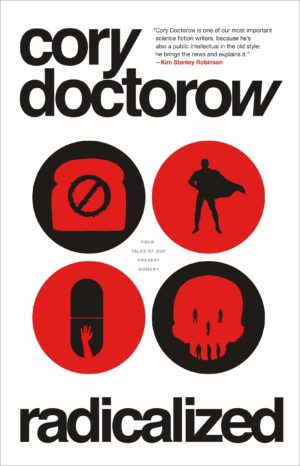 Told through one of the most on-pulse genre voices of our generation, Radicalized is a timely novel comprised of four SF novellas connected by social, technological, and economic visions of today and what America could be in the near, near future.

Unauthorized Bread is a tale of immigration, the toxicity of economic and technological stratification, and the young and downtrodden fighting against all odds to survive and prosper.

In Model Minority, a Superman-like figure attempts to rectifiy the corruption of the police forces he long erroneously thought protected the defenseless…only to find his efforts adversely affecting their victims.

Radicalized is a story of a darkweb-enforced violent uprising against insurance companies told from the perspective of a man desperate to secure funding for an experimental drug that could cure his wife’s terminal cancer.

The fourth story, Masque of the Red Death, harkens back to Doctorow’s Walkaway, taking on issues of survivalism versus community.

Join us as Cory shares his new work with fellow author Anand Giridharadas.

CORY DOCTOROW is a coeditor of Boing Boing, a special consultant to the Electronic Frontier Foundation, an MIT Media Lab Research Associate and a visiting professor of Computer Science at the Open University. His award-winning novel Little Brother and its sequel Homeland were a New York Times bestsellers. Born and raised in Canada, he lives in Los Angeles.

ANAND GIRIDHARADAS is the author of The True American and India Calling. He was a foreign correspondent and columnist for The New York Times from 2005 to 2016, and has also written for The Atlantic, The New Republic, and The New Yorker. He is an Aspen Institute fellow, an on-air political analyst for MSNBC, and a former McKinsey analyst. He teaches journalism at New York University and has spoken on the main stage of TED. His writing has been honored by the Society of Publishers in Asia, the Poynter Fellowship at Yale, and the New York Public Library’s Helen Bernstein Award. He lives in Brooklyn, New York