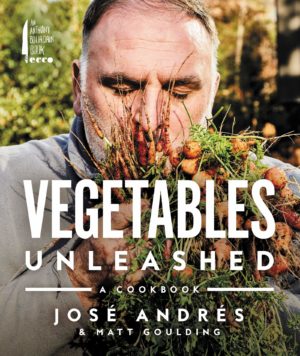 From the endlessly inventive imaginations of star Spanish-American chef José Andrés and James Beard award-winning writer Matt Goulding, Vegetables Unleashed is a new manifesto that will transform how we think about—and eat—the vast universe of vegetables.

With recipes highlighting everything from the simple wonders of a humble lentil stew to the endless variations on the classic Spanish gazpacho to the curious genius of potatoes baked in fresh compost, Vegetables Unleashed gives us the recipes, tricks, and tips behind the dishes that have made Andrés one of America’s most important chefs and that promise to completely change our relationship with the diverse citizens of the vegetable kingdom.

Filled with a guerilla spirit and brought to life by Andrés’s globe-trotting culinary adventures, Vegetables Unleashed will show the home cook how to approach cooking vegetables in an entirely fresh and surprising way – and that the world can be changed through the power of plants.

José Andrés is a Michelin-starred, James Beard Award–winning chef, and was named among Time’s “100 Most Influential People.” He is the founder and chairman of World Central Kitchen, the NGO behind #ChefsForPuertoRico, and cofounder of ThinkFoodGroup, which has more than thirty restaurants around the world. He is also the author of three cookbooks and the New York Times best-selling We Fed an Island, which describes how Andrés and his team cooked for hundreds of thousands of hungry Americans in Puerto Rico after the devastation of Hurricane Maria.