Kathleen Alcott, Author of America Was Hard to Find Book 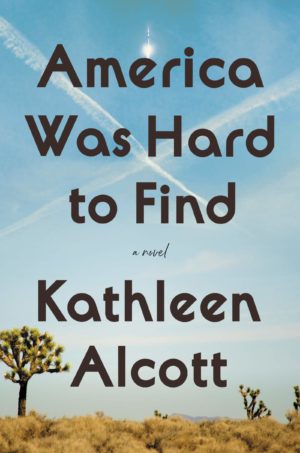 Ecuador, 1969: An American expatriate, Fay Fern, sits in the corner of a restaurant, she and her young son Wright turned away from the television where Vincent Kahn becomes the first man to walk on the moon.

Years earlier, Fay and Vincent meet at a pilots’ bar in the Mojave Desert. Both seemed poised for reinvention—the married test pilot, Vincent, as an astronaut; the spurned child of privilege, Fay, as an activist. Their casual affair ends quickly, but its consequences linger.

Though their lives split, their senses of purpose deepen in tandem, each becoming heroes to different sides of the political spectrum of the 1960s and ’70s: Vincent an icon with no plan beyond the mission for which he has single-mindedly trained, Fay a leader of a violent leftist group whose anti-Vietnam actions make her one of the FBI’s most wanted. With her last public appearance, a demonstration that frames the Apollo program as a vehicle for distracting the American public from its country’s atrocities, Fay leaves Wright to contend with her legacy, his own growing apathy, and the misdeeds of both his mother and his country.

Born in 1988 in Northern California, Kathleen Alcott is the author of the novels Infinite Home and The Dangers of Proximal Alphabets. Her short stories and nonfiction have appeared in Zoetrope: All Story, ZYZZYVA, The Guardian, Tin House, The New York Times Magazine, The Bennington Review, and elsewhere. In 2017, she was shortlisted for the Sunday Times EFG Short Story Award; her short fiction has been translated into Korean and Dutch. She divides her time between New York City, where she teaches fiction at Columbia University, and Vermont, where she serves as a 2018-2019 visiting professor at Bennington College.