Salman Rushdie with Colum McCann presented by Brooklyn By the Book 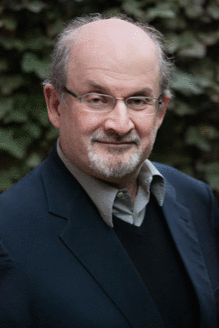 NOTE: This event has been moved from Congregation Beth Elohim to the Brooklyn Public Library’s Central Branch.

In his new novel, The Golden House, Salman Rushdie, author of such contemporary classics as Midnight’s Children and The Satanic Verses, presents a modern American epic of love and terrorism, loss and reinvention. On the day of Barack Obama’s inauguration, enigmatic billionaire Nero Golden arrives from foreign shores to take up residence in the architectural jewel of “the Gardens,” a cloistered community in New York’s Greenwich Village, with his three eccentric adult sons. Our guide to the Goldens’ world is their neighbor Rene, an ambitious young filmmaker. While researching a movie about the Goldens, he becomes seduced by their mystique and then implicated in their quarrels, infidelities, and crimes. Meanwhile, like a bad joke, a certain comic-book villain embarks upon a crass presidential run that turns New York upside down. Set against the strange and exuberant backdrop of our current culture and politics, The Golden House marks Salman Rushdie’s triumphant and exciting return to realism. In Conversation with Colum McCann.

Tickets are $34 for general admission and $31 for CBE/BPL-member admission. All tickets come with (1) hardcover copy of The Golden House for pickup at the program.

Brooklyn By the Book is a collaboration between The Brooklyn Public Library, Community Bookstore, and Congregation Beth Elohim.