Interview with J. L. Salter and Charles A. Salter, authors of Death Do Us Part 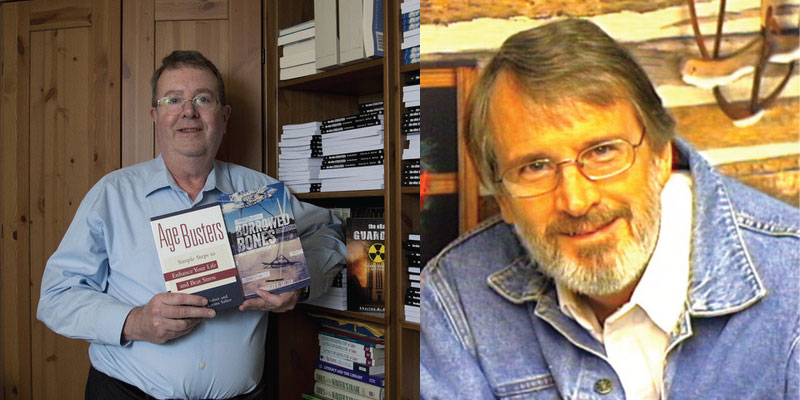 Writing has been Jeff Salter’s driving interest since about fourth grade… and I’ve never stopped. I love creating believable characters and turning them loose with interesting and/or humorous situations. The result has been romantic comedy, screwball comedy, romantic suspense, time-travel, and other science fiction. Though this is my first collection of short stories, I’ve worked with three royalty publishers in releasing fifteen novels and four novellas. I’m co-author of two non-fiction monographs (about librarianship) with a royalty publisher, a signed chapter in another book, and a signed article in a specialty encyclopedia. I’ve also published articles, book reviews, and over 120 poems; my writing has won nearly 40 awards, including several in national contests. As a newspaper photo-journalist, I published about 150 bylined newspaper articles, and some 100 bylined photos. Before I worked nearly 30 years in the field of librarianship, I was a decorated veteran of the U.S. Air Force (including a remote tour of duty in the Arctic, at Thule AB in N.W. Greenland). Married, I’m the parent of two and grandparent of six.

Charles A. Salter has been a writer all his life. A professional member of the American Society of Journalists and Authors, he has published about two dozen fiction and non-fiction books and hundreds of articles in scientific journals, popular magazines, and newspapers, as well as numerous U.S. Government Technical Reports. His adult mystery novels and juvenile non-fiction books have earned excellent reviews and won various awards. Currently retired, he served for 28 years as a Medical Service Corps officer in the United States Army. Following that, he spent many years as a civilian working at the military’s medical school, the Uniformed Services University of the Health Sciences, where he helped manage major biomedical research programs. He has often collaborated on writing projects with his brother J. L. Salter, and this is their third co-authored book. Living currently in Maryland, he is married, has three children and six grandchildren.

Were these stories all solely for entertainment, or did you have any other ulterior motive/purpose for them?

JLS: No ulterior motive. For me, it was a welcome change of pace from the novels and novellas I’d been writing for the previous dozen years.

CAS: I think most people read primarily for entertainment, but as I writer, I want not only to produce an entertaining, moving story, but also challenge readers to think a bit about the implications of my characters’ actions for their own real lives. I can’t detail a good example without giving too much away, but in my last story, The Caves of Lonesanne Blu, I think I make a very touching point about the human condition and the nature of love that at least some readers will deeply appreciate.

Did you have previous inspiration for these stories?

CAS: Definitely! Both of us grew up together watching so many of those classic, often mind-boggling 1960’s TV series such as TWILIGHT ZONE, THRILLER, ALFRED HITCHCOCK PRESENTS, and OUTER LIMITS. For this volume, we tried consciously to come up with our own original, mind-expanding stories that we hoped modern-day readers could enjoy in the same way now as we did then.

JLS: As Charles states, when we first discussed a possible short story anthology, we quickly focused on those mind-bending tales we’d grown up with on TV shows and “B” Sci-Fic movies. Once we got started writing – in two different states – each new story seemed to inspire new and different ones.

Did it take much imagination to come up with these stories, or were some or all always a thought in your mind?

JLS: Some of my stories arise from dreams. Others just pop in my head when I’m exercising, driving, or in the shower. As best I can recall, all five of my stories in this anthology were brand new concepts (after we’d agreed on the project)… as opposed to ideas I’d previously noted.

CAS: One of my plots (A Lousy Way to Rye) had been in the back of my mind literally for decades, ever since I first read about the biotoxin that is used in my story as a biowarfare agent. All the medical facts about that agent and how it destroys the body are absolutely true, and I always knew this disease could become the basis for a powerful story. As Jeff stated, I also got a couple of my other stories in recent dreams, and I woke up and wrote the rough draft just as fast as I could before the dream imagery and feelings could fade away.

Were any of these stories harder to write than the others?

CAS: For me, The Herndon Secret was the hardest to write. I loved the main characters right away and found it easy to write about their partner dynamic and their action scenes. But for much of the story I had to keep stopping and look up all the scientific details to make sure it was based largely on real scientific facts (with a couple of key Sci-Fi exceptions), real scientists by name, and actual recent events in world news. That one took a lot of research!

JLS: Some flowed more easily than others. Of my five, the most difficult was “Buddies Forever” because I had to do so much research to get the places, units, time frame, operational details, and language as right as possible. The other story that required a lot of extra work was “Time Conscious” — where I not only had to get the timetable exact (for the story) but had to convey those time differences to the reader in an understandable fashion.

Does either of you consider any of these stories your favorite out of them all?

JLS: I was recently asked this very question by a local acquaintance. My reply: all my stories – whether novel, novella or short story – are my “children” and I love them all. When I’m deeply engrossed in drafting or revising any one of them, it temporarily occupies most of my time and attention. That said, “As his Excellency Wishes” stands out (to me) partly because it has a nicely taut feel to it. It’s also the shortest of my five tales in this collection.

CAS: My personal favorite of mine is The Caves of Lonesanne Blu, the one that I wanted to go last as the capstone for the whole book. This was one of the stories which came to me in a dream, so the setting, characters, and events obviously resonate with something deep in my psyche. I am still moved every time I re-read it, even though I obviously know how it will turn out. My personal favorite of my brother and co-author’s stories is Blade of Grass, for which he imagined a possible scenario in the near future which is an extrapolation from current events we both have often talked about. It has great action sequences and says a lot about certain trends in current society.

Which do you enjoy more: short stories or novels?

CAS: As a reader, sometimes I prefer an orange and sometimes an apple, depending upon my mood and how much time I have to read on any given occasion. As a writer, I prefer to develop a full-length novel so I can spend more time with the characters and setting that I love. In fact, I am working now on a complete novel using the characters from one of the short stories in this book, The Herndon Secret.

JLS: As a reader, I guess I prefer novels. As a writer, my novels are getting shorter – 50k to 60k words, typically – and I feel pretty comfortable with that length. However, since Charles and I launched this joint short story writing project, I’m finding I really enjoy this format. In one sense, it returns me to where I started decades ago: poetry and short stories.

Have you always been a fan of the horror/psychological thriller genres?

JLS: Definitely, though I need to clarify that I do NOT like slasher films or gore-fests. But I was raised on the 1930s classics featuring Dracula, Wolfman, and the Frankenstein creature… plus the 1950s remakes from Hammer Films. Then there were all those 1950s Sci-Fic films — many of which do NOT hold up in modern time because the special effects are so cheesy-looking now. When TV began airing series like Twilight Zone, Night Gallery, Outer Limits, etc., I loved it.

CAS: I’m not really a fan of the horror genre, per se, but I love psychological thrillers and recognize that sometimes they contain horror elements. But it’s the mind-bending nature of a good psych thriller that I enjoy rather than any supernatural monsters or gore or whatever people like about horror genre stories. My aim is not to scare people and make them afraid to go to bed or enter a darkroom in their own homes, but rather to challenge them to think in more expansive ways about life and the human condition.

Because you both have a history in the military, did that make it easier to write your stories involving war and/or violence?

CAS: Absolutely! My 28 years in the U.S. Army definitely gave me the kinds of training in weaponry, military strategy, and fighting tactics to ensure reasonable fidelity to the facts of combat action, but without getting too graphic and gory.

JLS: My military experience – 3.5 years active duty and about 5 years active reserve – was considerably briefer than my brother’s… but I think military service is a great foundation for life, period. But, yes, individuals who served in the military have shared experiences – in basic training, for example – that all veterans can identify with. Obviously, however, actual combat is a factor that significantly separates military experiences. Many of my fictional characters are veterans, and many of those have been deployed — contemporary readers can readily identify with that.

Do you have any future works in the making?

JLS: This is another question I hear a lot. My answer is that I have some dozen (or more) novels working – in different stages, from 15k to nearly 40k words each – as well as scores of “starts” (5k to 10k words). Those, in addition to many concepts yet to be developed.

CAS: As mentioned in my response to question six, I am writing a complete novel with the same characters from my story here, The Herndon Secret. I hope this will become the first in an entirely new series. I can’t say too much about that just yet, though, because nothing has been finalized and may well be changed before it becomes final. In addition, both of us have already written several short stories for another joint anthology which we hope to publish if this one does well. 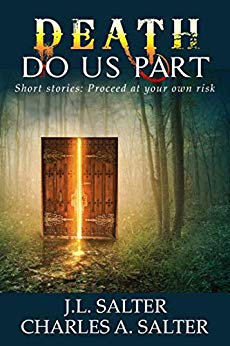 Death Do Us Part is their book. Remember those ground-breaking series from TV’s golden age which explored the frontiers of human consciousness and the dividing line between reality and other dimensions? Like those powerful stories, this new collection aims to bend your mind, squeeze your psyche, and maybe pluck a heartstring. Prepare yourself to enter our world of unique characters and experience their decisions to continue the path they’re on or open a door to new possibilities. What startling surprises may lurk just behind each door chosen? These ten tales of mystery, suspense, and high-octane action aim to give you chills and make you wonder how to select the roads and doors in your own life. An anthology of short stories by a writing team of two brothers, each of whom has published a couple of dozen books separately. This is their third book together.