Interview With Paul Centeno, Author of Maz’hura: Book One of the Twelve Dimensions 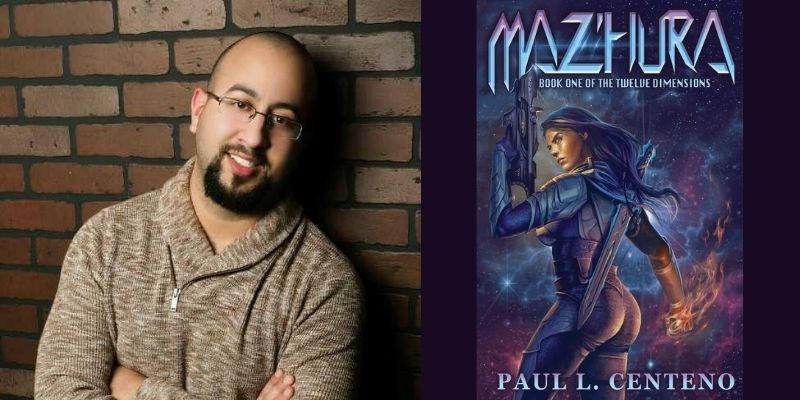 Where did the idea for Maz’hura: Book One of the Twelve Dimensions come from?

The idea for Maz’hura came to me in bits and pieces while writing other novels. I always wanted to create a series that merges high fantasy and science fiction together. My goal was to offer a story that has a Star Trek meets Lord of the Rings feel to it, which is not easy at all. It took ten years of writing other material before this book started coming together, and that was just for the initial concept and plot.

The story begins with the return of an alien species long thought vanquished. This very notion raises the hackles of many, whom all cite scriptures as proof such is impossible. Discipline (such as prison or worse) awaits those who challenge those scriptures, indicating Tal’manaism is inextricably intertwined with society and government. Tell me a little about the Tal’manac Order. Where did the idea for this government come from?

Like many cultures and spiritual movements in our own world, Tal’manaism mirrors aspects of our own history and reality in many ways. To this day, governments and religions are united in some countries. I wanted to create a similar, believable government whose spirituality trickles into the military and society of Shirakaya’s people. I mostly played around with teachings and concepts from ancient mythologies and extinct religions (think Mithraism, Manichaeism and Zoroastrianism), fusing them together in a distinctive way to create the mythos and cosmogonies that came to be known as the Tal’manac Order.

The Celestial’s computer is the first to identify the hostile aliens as koth’vurians. Later, when Shirakaya finds herself in hot water for disseminating this news, she never takes the easy road by conceding that she may be mistaken or that the computer must be malfunctioning, not even to protect herself when she’s accused of blasphemy. What does it say about Shirakaya’s character that she chooses truth over self-preservation?

The Tal’manac order recognizes that the koth’vurians were exiled beyond the twelve dimensions by the eternal Goddess. It is believed one day they will emerge from the Drift Void, but such an event will only occur during the end times. Shirakaya believes that time is now. Her overall fear of the universe possibly coming to an end is what ultimately makes her choose truth over self-preservation because, in her own mind, conceding means certain death for every living being in Ensar. In fact, at least when it comes to her way of reasoning, standing by her “truth” is the very nature of self-preservation itself.

Maz’hura is an intergalactic space opera that happens to be full of swords and sorcery. The book doesn’t get bogged down with the science behind things, taking technology like faster-than-light travel and teleportation for granted (often with a magical twist). Further, the protagonists find themselves up against giant creatures who, in the vacuum of space, speak freely, breathe fire, and flap their wings to maneuverer. When writing, and especially when writing sci-fi, how big of a concern is scientific accuracy?

Scientific accuracy has always been vital to me. In my other sci-fi novels such as Red Nova and Dark Sanity, I spent a great amount of time researching and making sure the technology in my books made sense. With the story of Maz’hura, however, it is a completely different universe where the laws of physics can bend and twist at the hands of a wizard or sorceress. There are even arcane astrophysicists. For example, the starships in this universe use FTM (faster-than-magic) travel. Soldiers use capsules called X-Phasers, which are teleportation pods fused with aspects of magic. And when it comes to the primeval koth’vurians, they are an arcane, magical race of shapeshifting beings who defy physics and the basic laws of nature. Overall, I tried to bring science and magic together. When the genre of fantasy comes into play, I think even scientists must have an open mind.

Tell me about your writing style. Do you plan out your stories in advance, or do you sit down at your keyboard and see where things take you?

My writing style is actually a combination of both. There are days when I plan out large parts of my stories, even whole chapters. While working my day job or taking a walk, I may get a sudden idea that I write down on my notepad or tablet. Other times it just comes to me as I’m writing. This sort of “improv” writing mostly came out of me when I wrote my 800-page dark fantasy novel, The Vagrant Chronicle. There are also many times when I go back to change or add things in an existing chapter months later, which is before the overall editing process.

You’ve written several novels in both science-fiction and fantasy. Do you enjoy writing in one genre more than the other? Are there any trappings you strive to include? Any you try to avoid?

The funny thing is that I like fantasy more than science fiction and yet have written more sci-fi novels than pure fantasy. The Twelve Dimensions series gives me a unique chance to write both genres in one. I wouldn’t try to avoid anything in particular. As a fantasy writer, I try to embrace everything. I’d actually like to include more steampunk, which readers will see aspects of in books two and three. Book four is my attempt to celebrate the many pulpy facets of the fantasy genre without clinging so much to science fiction, which is quite difficult to do when the book itself is a sci-fi novel. Book four is essentially an experiment, and I’m aiming to be successful with it.

At one point late in the book you use the words “paragon” and “renegade” in direct reference to good and evil, a possible nod to a popular series of video games. Do you play video games, and if so, have they had any influence on how you structure your narratives or keep characters on track with their personalities?

I initially saw the usage of paragon a lot in comic books, as well as the novel Paragon by Shauna Alderson. I also enjoyed the novel Renegades by Marissa Meyer. In my series, The Twelve Dimensions, I’d like to think of Jal Vokken as an entity who is neither a paragon nor renegade. As a “gray” character, he is beyond the notions of good and evil, or at least that is his state of mind as an AI (arcane intelligence). But yes, I am quite familiar with those terms being used in a particular video game series. Personally, it should have stayed as one video game rather than a trilogy, but money talks. As a millennial, I grew up reading comic books and playing video games. Some of my favorite video games include Xenogears, Lost Odyssey, and Star Wars: Knights of the Old Republic. Video games, like many books and films, have definitely inspired me on how I structure my narratives and characters. They are entertaining, but I also see them as teachers. Most importantly, I try to avoid being cliche, implementing nuanced character development and a twist to make my stories as unique as possible.

Dojin is always there to offer up a cutting remark (usually peppered with F-bombs). He’s rebellious, impulsive, direct, pugnacious, and he curses like a sailor. What was the inspiration for this character?

In an attempt to be realistic, I figured there should at least be one genuine renegade among the group of misfits who follow Shirakaya. Not everyone in the military is disciplined. We will always come across someone who doesn’t follow the rules or abides by the law. Dojin is such a soldier, and his character and overall demeanor only intensifies in book two. Some readers may find him amusing while others may be offended by him. In fact, even a character in the story is deeply offended just standing next to him. Shirakaya herself struggles to keep him under control. But don’t worry, someone new in book two will start to put him in his place.

Your book includes a professionally illustrated cover, intergalactic maps, and snazzy chapter headers. The audiobook version is stuffed with an entire soundtrack’s worth of music, and the narrator’s voice has so many effects applied to it (echo, modulation, multiple voices speaking in unison, etc.) that it at times felt more like a high-quality radio drama than a book. With regards to presentation, what are your goals when writing fiction? As a reader yourself, do high production values typically draw you in?

As a reader, what draws me in the most is a good story with great characters. Audio books are new to me. I’m still not used to them. I personally prefer to read a paperback instead of hearing it. But everyone is different in this world. Some enjoy the traditional paperback like me while others use a kindle. Others appreciate both. Then there are those who have less time and prefer listening to someone read a book for them while they commute to work or simply relax. Most of my audio books are traditional with just the voice actor reading. I never planned on Maz’hura having sound effects or music. Then, one day, I heard Neil Gaiman’s Sandman, and the concept of that production blew my mind. Yet the simplest productions can many times be the greatest gems. It depends on how each production is made. Audio books will continue to evolve. Similar to films based on books, they are made to please an audience. Whether writing fiction or working with a voice actor/actress on my audio books, my goal is to make everything as entertaining as possible for readers and listeners. Not all high production values are successful. Sometimes we come across an indie film, video game, or book that ends up being a hidden gem. But it’s also subjective. No matter what, I always try to provide a good presentation in all existing formats. And if I ever get a movie deal one day, it would be my hope to also be a part of that production.

As of this writing there are three books in the Twelve Dimensions series, with a fourth on the way. Do you have a planned number of books for the series with a story arc?

As of now, book four will end the main story arc. After that, I plan to continue writing more novels within The Twelve Dimensions universe. Some of them, for example, will focus on secondary characters from the original story. In theory, each character will become a primary protagonist and have their own book. 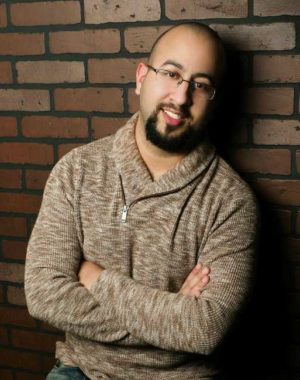 Paul L. Centeno is an award-winning fantasy and science-fiction author, born and raised in New York City. As a young adult, he studied at Herbert H. Lehman College where he earned a BA in Philosophy and Creative Writing. After graduation, he worked with Gabriel Packard, Associate Director of the Creative Writing MFA Program at Hunter College, to master his craft.

His fantasy novel, The Vagrant Chronicle, was critically acclaimed in Writer’s Digest Annual Book Awards. Kirkus Reviews, in their January 15th, 2013 magazine, stated, “Centeno yearns to create something completely new, and if we immerse ourselves in his cosmos, we will be richly rewarded.” In 2014 and 2015, he won awards from Writers of the Future for his short stories, Steamwalker and Celestial Heights. Later in 2016, he started receiving auditions from voice actors for his novels. As of 2020, he signed a contract with actress Courtney Holly to create the audiobooks of his new fantasy series.

Centeno lives in New England and is currently working on his eighth novel.