Interview with Rob Edwards, Author of The Ascension Machine 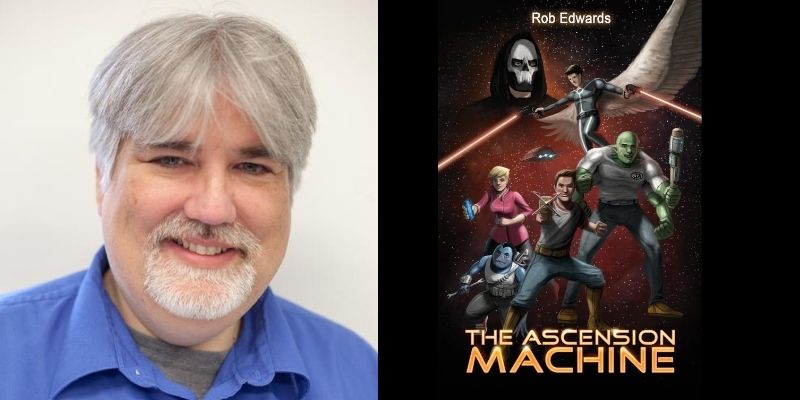 Rob Edwards is a British born writer and podcaster, currently living in Finland. He was brought up on classic sci fi and comic books, Tolkien and games, so it was inevitable he would meet his wife in Lord of the Rings Online. He saved her from a vicious orc, she’s been saving him ever since.

His podcast, StorycastRob, features readings from his short stories and extracts from longer works.  His stories can also be found in anthologies from Inklings Press, the Sci-fi Roundtable, the superhero anthology Somebody, Save Me!, and in the Word Count Podcast.

His greatest geek pride is his entry on Wookieepedia, the result of writing several Star Wars role playing game scenarios back in the day.

1. Where did the idea for Ascension Machine come from?

The starting point for The Ascension Machine was a question of identity. The secret identity is such a staple of the superhero genre, the idea of coupling that with the con artist archetype to create a secret secret identity just tickled my imagination. Setting it all in a college, a place where a lot of people first discover who they are going to be as adults seemed like a perfect match.

2. Was the main character something you had to work at or did he come naturally?

I’m almost pathologically honest in my real life so the freedom to lie and do so brazenly has always fascinated me. I play a lot of role-playing games, and my characters often end up as liars and swindlers, because of escapism. In fact, Grey’s adventure on the planet Bantus is inspired by something I did in-character during an old D&D campaign. So, I’d say once I found his voice, Grey came pretty naturally, even if in the real world he couldn’t be further from me.

3. Did Ascension Machine involve a lot of world building?

In terms of having reams of world notes about the setting and how it works? Not really. I wanted to build the world that made sense from Grey’s eyes so I concentrated on the things that he would want to talk about. I can’t give you a treatise on how interstellar travel works in this universe, because Grey doesn’t really care. It works, he uses it, that’s enough for him. He is streetwise, but in a very narrow space, he discovers a lot about his world along with the reader, so I got to unfold the universe as I went.

4. Did you work hard at developing the different races to fit in the universe?

Some more than others. Grey’s best friend is a Brontom clone warrior called Seventhirtyfour, and I have extensive notes, and a short story, talking about how their culture functions. Much of it doesn’t appear explicitly in the book, of course, but it informs a lot of Seventhirtyfour’s attitudes and behaviour. There are other races, particularly those who aren’t represented in the main cast, where my notes are much sketchier. I expect that to change as I explore more of this universe.

5. Do you outline a lot when you write or do you prefer to let the words just flow?

Somewhere in between, I’d say. I can’t start writing before I know where the story is going – that plan I keep in my head, generally, and it can take months to ideate and percolate. Calling it an outline would be a little grand, though. I know the major beats of the story before I write, what I want my theme to be, but the writing is where I discover how my characters react to the events. Naturally, that throws up a few surprises along the way, so the plan is pretty fluid.

6. Who are some of your influences?

The list is long! If you will excuse the cliché, my dad is probably one of my biggest influences. He’s a talented storyteller with a love of classic sci fi and a lot of his favourite books became my favourite books. Beyond that, my writerly subconscious is full of Asimov, Heinlein, McCaffery, Pratchett and George Lucas. For this book specifically, I would probably call out Lois McMaster Bujold, whose Vorkosigan series is a masterclass in modern sci fi adventure. There’s some J K Rowling in there, hard for there not to be, given the school setting, and if you look for it, there’s even some Alexandre Dumas. But with the world of superheroes so closely tied to this story, I also need to mention comic book writers like Gail Simone, Keith Giffen, Geoff Johns and any writer who worked on DC’s Legion of Superheroes!

7. What are some of your favorite books?

I have a reasonably eclectic reading history, I think most writers probably do, so I have favourites from all over the place. I have favourite Austen and Dickens novels, favourite mystery novels and even favourite TV tie-in books! But The Ascension Machine is sci fi, so why don’t I indulge my bias for sci fi and fantasy. Erik Frank Russell’s Wasp, which now I think should probably go in my influences, the tech might be dated in this 1957 novel, but the writing is clean, sharp and witty. Roger Zelazny’s Chronicles of Amber, is a series I’ve read more times than I can recall. I mentioned her already, but Bujold’s Vorkosigan saga is something special, a series that grows and changes as its protagonist does.

8. Do you have any advice for new writers?

Nothing very new and revelatory, alas. Read often and widely. Have a solid grip on the fundamentals before trying to break them, be sure to understand why you’ve chosen your point of view, and jolly well stick with it. The Ascension Machine is told first person from Grey’s point of view for all sorts of reasons, some of which will only become clear in later books.

Develop a habit of writing; you don’t need to rack up thousands of words every day, but the more often you write, the more you will get written.

I’m a gamer. Board games, role playing, I met my wife playing the MMO Lord of the Rings Online and we still game together daily. The world being what it is right now has curtailed some of my other hobbies, but those at least can continue. I record some of my short stories for my podcast, StorycastRob, so if you want the hear my stories like I do, give that a listen. I dabble with YouTube videos from time to time too, mostly to amuse myself.

10. Are you working on something new?

I work with a small indy publisher which releases annual anthologies featuring fantastic indy writers. We’ve just released Tales from the Pirate’s Cove, a collection of a dozen stories of pirates of various flavours. But my focus now is working on the sequel to The Ascension Machine. It will be called The Crossover Paradox and follows Grey and his friends into new mysteries and adventures.