Invasion of the Index Cards 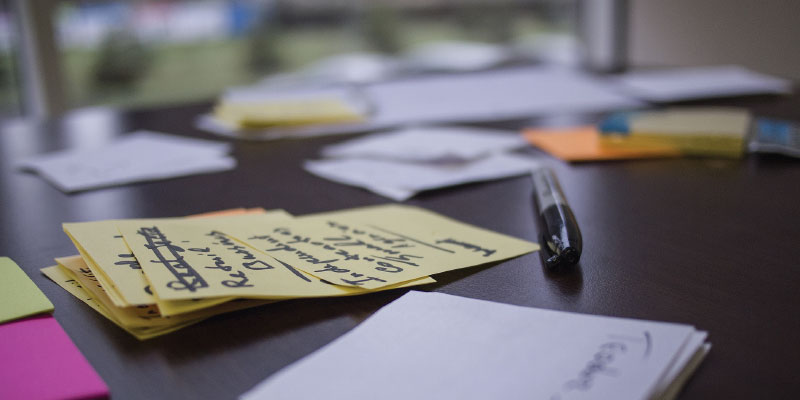 The index cards start in a tidy pile on my desk. As a writing project progresses, the pile of old-school, variously colored cards grows, forming the arc of the story. I assign each chapter a card, using a color-coded system to differentiate character perspectives. Multi-colored pens and highlighters help me track seeded hints and plot twists.

I begin by taping the index cards to the wall in my office. Then, I rip them down and smack them back up multiple times in order to annotate, adjust, and restructure. The cards often flutter with Post-It notes, planted flags of notions considered but not yet committed to. In the midst of major plot restructuring, my cards migrate to the dining room table; often impeding my family’s ability to sit down for a meal for weeks at a time.

These index cards are my most essential tools while working on a book. My writing process as a whole is a pastiche of methodologies both right and left brain-based.

I begin each daily work session with a combination of stretches and affirmations designed to open my head, my hips, and my heart. I set serious and specific goals for the day’s work. I prefer to write in the morning — my sweet spot is 9 a.m. until about 2 p.m. (I find that if I keep going later in the afternoon after a morning start, much of what I produce is utter garbage). On the other hand, I’ve been known to steal away to my computer in the dead of night, unable to contain my racing thoughts and fingers, feverishly writing until dawn.

My initial notes for a new work are always done longhand in a journal, free-flowing thought supported by ambient electronic music. A 100-point questionnaire that addresses an individual’s history, personality, appearance, psychology, and other traits help me develop characters. I designed the questions to be answered using free-association with gut spontaneity or skipped and returned to in another session. I complete the questionnaire briskly while listening to energetic alt-rock.

I outline and re-outline before I begin a novel and then do it all over again once I’m deep in my first draft — once my characters have inevitably and delightfully taken control of the reins.

Through it all, the index cards travel with me — to a coffee shop if I need to look at them in a different environment, to my nightstand in case inspiration strikes during the night. By the end of the draft process, the cards are tattered, littered with crossed out markings and furious circles, the words NO and YES underlined and emphasized with exclamation points.

When a book moves on to the copy-editing stage, I collect the cards, careful to remove any faint remains of sticky tape, and assemble them in the structural order to which I’ve committed. The time of endless possibility is over. Writing involves making decisions and by this point, I’ve made mine. I no longer need the cards, but I keep them anyway. I bind the cards together with rubber bands and place them in a shoebox, both coffin and shrine. They represent the most vital and fertile part of my creative process and I can’t bear to let them go.

Ballantine published filmmaker Nina Sadowsky’s debut thriller, JUST FALL, in March 2016. She is developing a TV series based on the book with producer Mark Canton.

Sadowsky has written numerous screenplays and produced many films including perennial favorite “The Wedding Planner.” She also teaches script development and producing at USC’s School of Cinematic Arts.

Her second novel, THE BURIAL SOCIETY, was published by Ballantine on January 30, 2018, and she has just concluded a deal to make the thriller the first of a three book series.