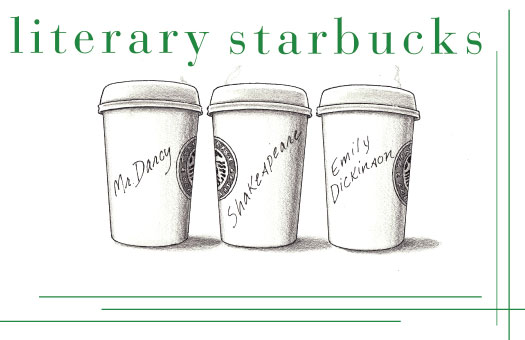 Have you ever wondered what intricate, elaborately-named drink your favorite authors and literary characters might order if they so-happened to wander into a Starbucks? What kind of tea would Jane Eyre drink? How many lattes would Mr. Darcy have to drink before he finds one he likes?

In Literary Starbucks, three students from Carleton College explore such pressing matters with humor and erudition. Based on the eponymous tumblr, literarystarbucks.com, this witty book satirically posits coffee and chance encounters of authors and famous characters in a single Twilight Zone-esque Starbucks. For the first time, the authors and characters actually meet: Nancy Drew and Agatha Christie exchange a high-five; Christopher Marlowe is murdered by Hannibal Lecter; and Gatsby and Romeo pine together over cups of java.

Manhattan Book Review’s Faith Aeriel had a chance to interview the authors about the inspiration behind and the humble beginnings of Literary Starbucks.

Q. Where did the idea for Literary Starbucks come from?

Jill Poskanzer: I came up with the idea for the blog while in an English class senior year of college. My teacher and I made a joke about what John Keats would order at Starbucks, and to borrow an oft-used metaphor (it’s okay, I have an English degree that allows me to do so), a lightbulb went off in my head.

Q. How do the three of you know each other?

Wilson Josephson: We all met separately before convening on Literary Starbucks. Nora and I were neighbors in our dorm freshmen year, and used a convenient crack in the wall to pass notes and doodles back and forth between our rooms. Somewhere, there’s photographic evidence of the Salvador Dali mustache she drew on my face that fall, but there’s no need to dig that up. Jill and Nora sang in the same a capella group at Carleton for three years. Jill and I were both English majors, and worked together in a fiction workshop. Most importantly, we’re all total nerds – and that has its own kind of magnetic pull!

Q. Do all three of you contribute to each of the parodies or are they typically just written by one of you?

Nora Katz: We all have divergent literary tastes that overlap in all the right places, so we’re able to cover wide territory with our individual posts (though in the book, we’re calling them “vignettes”). We consult with each other on editing, but for the most part each parody is written by just one of us.

Q. How did a Tumblr turn into a book?

JP: Right from the start the blog resonated with people, to our shock and delight, and fairly quickly we amassed a large following on Tumblr. After that, we were contacted by our current agent, and we began working on turning the concept of the blog into a book. The key difference in the adaptation is the interaction between authors and characters, which we think adds a lot to both previously published and new orders.

Q. How did you choose which authors and characters to feature?

Q. Are the parodies in the book original or have they also been featured on the Tumblr as well? If they were on Tumblr first, how did you pick which ones made into the book?

NK: Approximately half of the the vignettes in the book were previously featured on the blog, though all have been altered to fit into the book’s more narrative form. We spent a lot of time choosing authors and characters to put in the book – and felt guilty about leaving people out! Ultimately, it came down to which posts we liked the best, either because the subjects are dear to our hearts or because the writing was particularly good. We also looked for subjects who would interact with each other in interesting, profound, or hilarious ways.

JP: The ubiquity of Starbucks and the automatic recognizability of it was the driving factor behind the choice, honestly. Nearly everyone I know has been to a Starbucks, or is at least familiar with them, so the idea that beloved authors and characters could also frequent them creates an immediate connection between them and the readers and followers, which I think is why the blog is so popular. Who wouldn’t love to run into JK Rowling at Starbucks?

Q. What is the best way to keep to up with Literary Starbucks after exhausting the humor in the book?

WJ: Well, the book is based on our blog. If you haven’t seen that yet, there’s a fairly deep archive to explore. And we try to keep new jokes flowing!

Q. What responses have you received from followers?

NK: The wonderful thing about the Internet (and Tumblr in particular) is that people who read content can respond easily and in very personal ways – our ask box is always full of nice messages from people who found meaning in a post or in the blog in general. We love hearing from baristas who read the blog during their down time at work, and hearing from fellow humanities majors who love our particular brand of nerdy humor. We especially love hearing from teachers who are using the blog in their classrooms to help a new generation of students fall in love with literature. That’s a huge honor for us, and we take it seriously.

Q. Do you plan to continue the Tumblr after the book is released?

JP: That will largely depend on the level of interest from our fans and followers! Certainly life transitions have had an effect on the amount and frequency of posts. The blog began when the three of us attended the same college, and in the last year and a half we’ve all graduated and moved away. We used to adhere to a strict publishing schedule, and we’ve since relaxed that into a more inspiration-based practice – we post whenever one of us has an idea for an author or character order, instead of churning out a certain amount per day or week. As long as there’s a demand, we’d love to continue running the blog, but as for the level of activity, that remains to be seen.

Q. What do you order at Starbucks?

WJ: I’m not a coffee guy…it’s too bitter for me! I usually buy something from the pastry case–I’ve got a weakness for the lemon pound cake, but I’ll eat just about anything.

Q. Which is your favorite author order?

JP: I’m pretty proud of the e.e. cummings order, which opens the book.

WJ: My favorite order is my parody of William Blake’s “Jerusalem.”

NK: My favorite order is Billy Collins, though I’m also very proud of my addition to the Sam/Frodo canon. 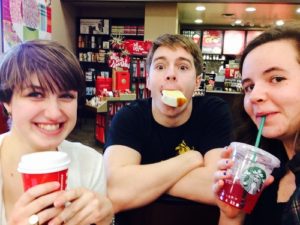 Nora Katz graduated from Carleton College in June 2016 and is currently pursuing her MPhil in Public History and Cultural Heritage at Trinity College Dublin.

Wilson Josephson graduated from Carleton College in 2016, despite his best efforts. He is a poetry editor and a fiction writer.

Jill Poskanzer is a graduate of Carleton College, with a degree in English. She works at CBS Studios in Los Angeles.