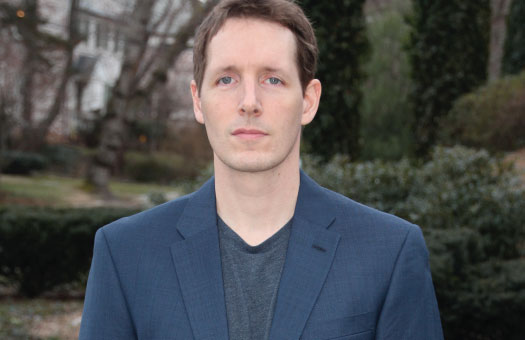 Joe McGinniss Jr. is the author of Carousel Court and The Delivery Man, a New York Times Book Review “Editor’s Choice” that is being turned into a feature film by Highland Films. The son of the late writer Joe McGinniss, he lives in Washington, DC with his family.

Faith Aeriel spoke with McGinniss about his latest novel, Carousel Court, which follows Nick and Phoebe Maguire as they move their small family across the country to Los Angeles in hopes of a fresh start. But when they arrive in LA at the height of the economic recession, their lives are turned upside down and both Nick and Phoebe think they know the best way to land themselves back in the middle class, even if it means scheming without the other.

Q. Both Carousel Court and your previous novel, The Delivery Man, investigate what it means to live and survive in a modern world. How are these ideas represented similarly or differently in each of your novels?

A. So much is left to the individual to navigate and prosper in an increasingly merciless world. People do what they can to make a living, stay afloat, buy time until something stable comes along. Look no further than Uber drivers. But I’m not saying anything we all don’t already know. In The Delivery Man, these kids needed to find a way forward despite serious emotional wounds, financial limitations and the moral ambiguity of their hometown. Sexualization of young women was at its peak and the Internet sucked anyone who dared into a rabbit hole of easy cash and insane danger.

The couple in Carousel Court – Nick and Phoebe – are further along in their emotional development: they’re adoring and dedicated parents, they’ve made mature, if not inspired, professional decisions. But they’re still on their own – and they still long for more: more income, more security, more house, more of all that life seemed to promise them when they were just starting out together. When they’re crushed by unimaginable debt their marriage is tested, their moral center is rocked and they become individuals again, doing what they can to salvage some thread of what felt pure and real in an otherwise unforgiving new world.

Q. The Delivery Man was written and published at the height of Myspace’s popularity. Now Carousel Court is being released into a world of iPhones and Instagram. Taking into account the changes that have taken place in technology and social media since your first novel, did you find yourself approaching writing Carousel Court differently than you did The Delivery Man?

A. Absolutely. There was a novelty to the array of social media outlets that catered to personal expression. When I wrote The Delivery Man, Facebook was barely a thing. So The Delivery Man integrated more social media because it was so new and because the characters were younger and more versed in whatever was new. Writing Carousel Court, I didn’t feel like social media was relevant to Nick and Phoebe given where they were in their lives – drowning. I considered whether either or both would use Facebook or Instagram to bullshit their “friends” and family about how fantastic their lives were with cheery posts and a barrage of pictures of their young son Jackson and their adopted dog. That could have been interesting. Maybe for the paperback?

Q. What did the incredibly fast pace at which technology is changing mean for your characters in Carousel Court?

A. I suppose it allowed them to outfit a home they planned to flip without ever having to set foot in it. They could point and click and purchase every upgrade from home. They could carry on illicit relationships using a laptop cam and their iPhone. They could argue and make up and flirt and threaten and reconcile without saying a word – all before lunch.

Q. What other factors of modern life do your main characters find themselves facing?

A. Fear. Fear of the stranger. Fear of random violence. Fear of failure. Fear of their own limitations and an overwhelming sense that control of their lives was slipping from their grasp, was in someone else’s hands.

A. She would know better how to answer that. I’ll give it a stab: Nick and Phoebe, and their neighbors, were not Harvard educated, (Emerson and Boston U respectively), don’t have trusts or parents underwriting them financially, i.e. summer is not a verb for them. It’s three more months of work, only hotter, with maybe a couple long weekends at the beach. They and their neighbors are in underwater homes they were lured into by predatory lenders. They are left to fend for themselves, ward off external threats, and find a way out of the quicksand before the worst happens. That’s a guess. She’s brilliant. She would have a much better response.

Q. Do you consider Carousel Court to be a story about the American Dream?

A. Not being flippant but: yes.

It’s more nuanced of course. And defined differently depending upon where you start. People want to be happy, content, loved, secure, safe. They want to live forever if their life feels worthwhile and has meaning. There are too many who don’t feel loved and valued and all that sadness and resentment can redefine what the American Dream is for them, rendering it much more materialistic. So it’s unique to each of us. Carousel Court in many ways documents the shifting definition of the American Dream for this young married couple.

Q. Why did you choose Los Angeles to be the backdrop for Nick and Phoebe’s story?

A. In literature, contemporary Los Angeles and how life there is depicted is extremely varied and always compelling. My father never had a chance to read Carousel Court before he died, but knowing the novel was set east of Los Angeles, he sent me some fantastic works about the city and literature of and about the region. My favorite was The Misread City: New Literary Los Angeles edited by Scott Timberg and Dana Gioia. In it, a number of very smart people wrangle with issues surrounding the classic stereotypes of Los Angeles: rich Anglo kids, coked-up zombies, nihilistic heroines whose lives are devoid of meaning, all of whom followed Raymond Chandler, Aldous Huxley, and Nathanael West. In it, you can find  a wonderful essay by David Fine about fictional apocalyptic renderings of the city. And it makes sense, since the place lends itself to disaster: the earthquakes, the fires, the floods, the wildlife, the winds, the disconnection of communities because of zoning and freeways and the transient population. I appreciate fiction that utilizes the surroundings, natural and otherwise, to help set a mood and give the reader real feeling. If a writer can make me feel a place, whether it’s the stark, brittle cold of New Hampshire in the winter that Russel Banks offers in Affliction or the sun as an orange monster of Bret Easton Ellis’s Less Than Zero, I’m all in.

Q. According to Kirkus Reviews, Phoebe is “a lexicon of contradictions.” What makes her such an interesting character?

A. She’s in constant motion – whether physically or mentally – until she crashes. She’s at war with herself. She’s so devoted to her child yet filled with self-loathing for not doing better by him. She’s at a crossroads in her life and it’s nearly killing her.

Q. Where did you draw inspiration for the characters and events in Carousel Court? What aspects of Nick and Phoebe’s experiences are pulled from your own life or the lives of others you know?

A. Too many of my friends whose weddings I attended are now divorced. I have friends who felt betrayed by the other for changing in ways they didn’t anticipate, for not living up to expectations or challenging themselves more and doubts crept in. This sense that there is promise unfulfilled, that what they saw for themselves together, something stronger,  vibrant, was giving way to the mundane and disappointment and resentment was unavoidable. I’m happy to say that none of it came from my own experience, but as a child of divorce and knowing what failed and faltering relationships look like, it was a stretch to imagine some pretty dire, extreme breaking point scenarios for Carousel Court.

Q. Why did you choose to use a third person narrator?

A. I like the flexibility it offers. A writer can stay close to the action, the thinking and motivations of a character. First person can offer an immediacy that I like, but it’s quite limiting in terms of what a writer can express or even notice because it’s all determined by what the character whose point of view your writing from would or wouldn’t notice or think or do.

Q. Do you feel that your father, Joe McGinniss, Sr., being a writer influence your writing and your choice to be a writer?

A. Quite the contrary. He was brilliant and worked so hard at it and earned great success. But it took such a toll on him personally, the pressure to produce, the need to be accepted, if not lauded, by critics and industry professionals. It was a pretty rough ride for him and not one I had any interest in taking. I came to writing very late as a result, after putting my twin career goals of politics and professional basketball aside. I was thirty with a graduate degree in public policy, a ton of student loan debt and what I thought was a novel. It wasn’t but I knew it was something I had to do. And even when my father warned me off quite explicitly on numerous occasions to not pursue a writing career, especially fiction, that threw fuel on the fire and there was no way I was going to quit.