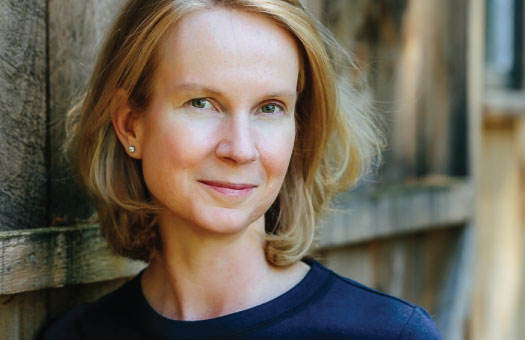 Mary Waters-Sayer is the author of The Blue Bath, which follows Kat Lind, an American expatriate living in London. Passing an art gallery one day, she finds herself face-to-face with a painting of herself done by a long ago lover. The likeness of her own image draws her back into a past that she never though she would see again and she finds herself in Paris questioning her past and present and the choices that led her from one to the other.

Faith Aeriel interview Waters-Sayer about writing The Blue Bath and the themes that can be found within the story.

Q. What was your inspiration for The Blue Bath?

A. The inspiration for The Blue Bath was a small moment of connection in a crowded city.

I was living in London at the time, rushing to or from somewhere, when I passed an art gallery and caught sight of a portrait of a woman behind the glass.  We locked eyes for an instant as the city rushed past us.  And then I did what most people would have done in that situation.  I kept walking – hurrying on to wherever it was that I needed to go.

Q. Why use a painting—something so public and visible—as the gateway for a love affair—something secret and hidden?

A. That’s a great question.  I find it fascinating that a work of art can be simultaneously deeply private and entirely public.  Most obviously, based on the viewer’s relationship to the artwork itself – no doubt the subject of a portrait will regard it differently than the casual viewer does – but more broadly, no two people experience the same thing in exactly the same way.  Something that is meaningful and resonant with one person may not be with someone else.  This idea that perception is subjective, even between two people who love each other, runs throughout the book.

Q. Why did you decide to use painting as the medium Kat is represented in over photography or some other art form?

A. Painting is such a sensual art form – the colors and textures and scents.  It is slow and detailed and that rhythm seemed to reflect what is between Kat and Daniel.

Q. The idea that the past is in constant conflict with the present—renovating an archaic home, Kat being captivated by an old image of herself and being drawn in by a former lover again—is a theme throughout the novel. Why did you decide to represent this idea?

A. I am enamored of the idea of tenacious beauty.  That a grand gesture or creative impulse or even something as simple as a deeply-felt moment can linger well beyond its expected lifetime.  The title of the book refers to a bath that was painted blue in a fit of artistic expression and, despite the passage of time, the paint still imparts a tint to the water when the bath is filled.  I love the idea that the past is not so easily erased.  This may be a result of having lived in Europe, where the past is so present.

Q. You lived in London for twelve years. Did this influence the way you wrote this story? Did you travel to Paris as research for this novel?

A. I started writing The Blue Bath while I was living in London and it definitely informed the book. While Kat’s story is not mine, she walks the same streets that I did.  I have spent time in Paris as well and the book is populated with some of my favorite spots, notably the Musee Rodin.

Interestingly, I think the book also benefited from the fact that I left Europe halfway through writing it.  This helped me understand the different perspective Kat has on Paris when she is there vs. when she looks back on it.

Q. Like you, the protagonist is an American expatriate living in London. How much of yourself (and your family and friends) do you see reflected in the characters?

A. In terms of myself, my mother died several years before I started writing the book so I understood how seismic an event that was for Kat.  While none of the characters in the book are intentionally modeled on anyone, there may be elements of people I have known that have made their way onto the page.   That said, I think the largest aspect of the book that is taken from my own life is really London itself.

Q. How do these two romanticized cities influence the trajectory of the novel?

A. Setting is such a critical element of a story.  As someone who has lived in quite a few places, I strongly believe that location influences state of mind and behavior.  People are different in different places and this is even more pronounced when we are young.  I doubt Kat and Daniel’s story would have played out in the same way if they had met on the Upper West Side of Manhattan.

Q. Do you see similarities between how a painter studies their subject and how a writer might study someone who was the inspiration for a character?

A. Certainly.  There are undoubtedly parallels between the way artists and writers see their subjects and characters.  I think at its core, it is a conscious way of seeing someone, a kind of looking with intent.

I would add that I found it brilliant fun to be able to create works of art using words instead of paint.  Every single painting in the book is utterly real to me.  I can see each one of them absolutely clearly.

Q. What has your experience been as a debut writer?

A. My experience has been wonderful thus far.  Writing is such a solitary endeavor, but I have been fortunate to meet some truly lovely people throughout this process.  And to work on something for so long and then to see it out in the reading world is exhilarating.

Q. Do you have plans for any future novels?

A. I am working on two novels at the moment.  I am watching to see which one outpaces the other in my heart.