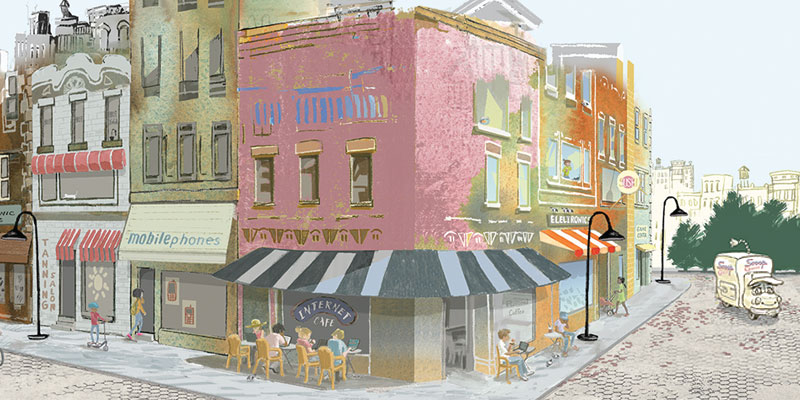 I sat on the bed and put my feet up on the bathtub. Something was tapping on the window. But the glass was painted over, so I didn’t know what. I’d made it to the tiny New York apartment of a friend of a friend of a friend. I had three children’s picture book dummies and my portfolio. I had the schedule of my editorial interviews written on index cards. I locked the four deadbolts and climbed in bed.

It was dark in there even with the bright city lights outside—until the door opened.

“Hey babe, I used my keys,” said the tattooed man. “Now where’d I put my pants?”

The purple haired editor asked, “What gem have you written that will get me my own imprint?” She looked at my book dummy. “So what is in the magic box?”

“I thought I’d leave that unresolved—so the reader could imagine any ending they wanted!”

The purple finger-nailed editor asked, “What country did you get these folktales from?”

The purple-nosed editor put his hand out. “Takeaways?”

I knew. The last editor didn’t need to say it. “You can’t think I would buy these stories?”

I wasn’t going to cry until I was inside the elevator, but Vera B. Williams was already there, so I took the nearest stairs and triggered the fire alarm. Fire alarms are loud, but the editors and art directors leaving the building seemed orderly enough. Outside, everybody was looking up.

I didn’t look back. 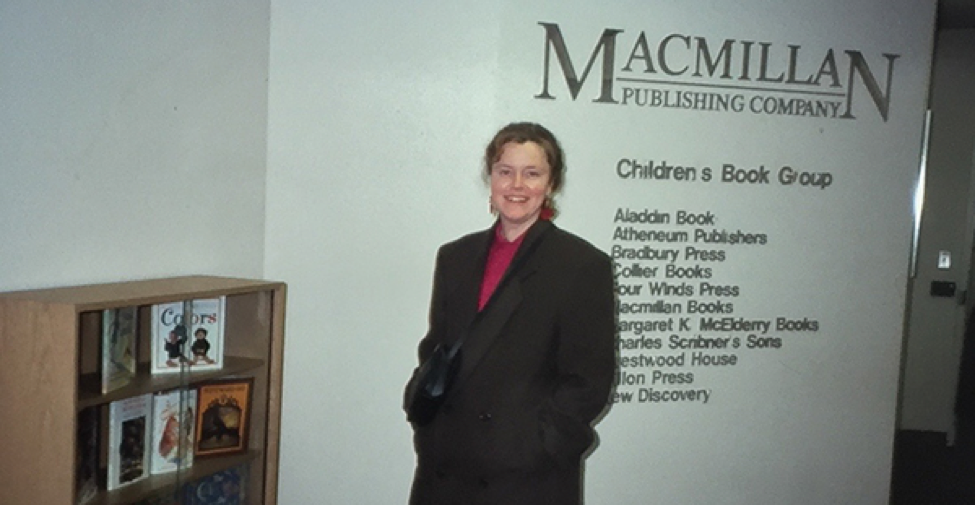 But I came back.

One Saturday I went to Nzinga, a musical performance on 42nd Street. The theatre lit up as fifty African dancers with painted faces and bright costumes leapt and spun down the aisles to thundering rhythms. My heart thrilled to watch them—they were all children.

I asked the usher if I could have the name and phone number of the group’s choreographer. I don’t know why he got it for me.

In Harlem, I opened the door of the cathedral and followed the pulsating sounds. Downstairs musicians were drumming, children were dancing, and the choreographer was calling out steps. Everything stopped. The dancers separated for me to cross the wide room. A hundred eyes watched me hold out my hand to the choreographer.

“I don’t know if a publisher would buy it, I said, “but I think your dancers would make a great children’s book.”

The charming and mega-talented Júlio Leitão of Batoto Yetu smiled and said, “I agree.”

Júlio and I worked together for two years to create a slim paperback entitled Drumbeat in Our Feet for Bebop, Lee & Low Books’ imprint for schools. Within the week, my editor called and said, “We love Drumbeat! We’d like to enlarge it into a hardbound trade book!” 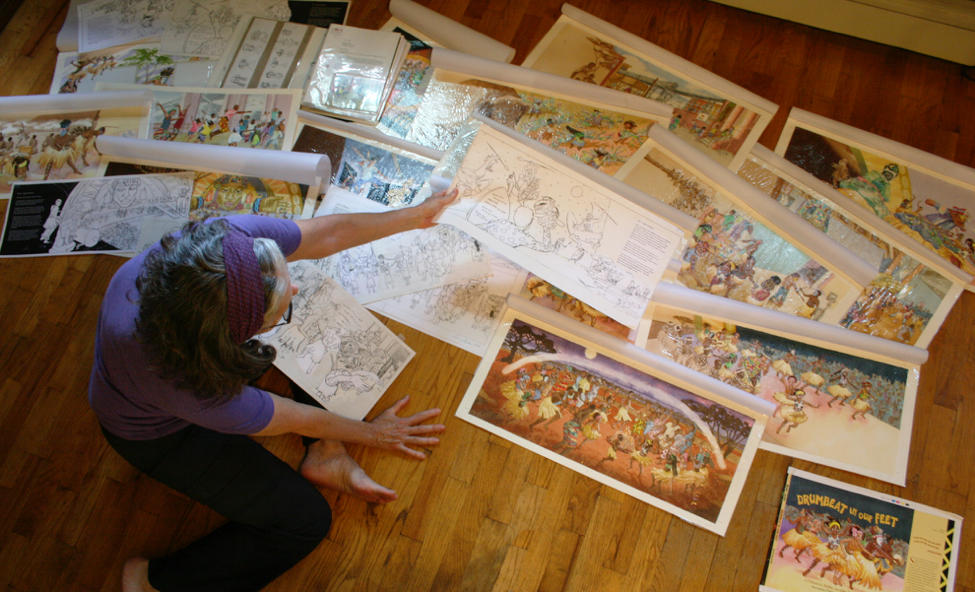 After seeing my book dummies and portfolio at a children’s book conference the editor asked me, “Anything else?”

Yep! I sold a book before I wrote it.

That editor moved on to another publishing house saying, “Make sure and keep those three wheels on Scoop.”

Editor number two loved the manuscript. She said, “We’re enlarging Scoop from 32 pages to 40 pages. We’re going to increase the height and width. There will be printed end papers and embellishments on the cover.”

Now Scoop had a huge 22-inch wingspan. I had space to put in Easter eggs—details for kids to discover just for the fun of it. I illustrated a tiny pigeon coop on top of a building and a plant withering in the window of a hot yoga studio. Scoop lots of room to zoom, zoom all over the pages.

Editor number two moved on too. But that was okay, because I had finished writing and illustrating Scoop the Ice Cream Truck. I presented the finished work to editor number three.

“Nobody told you?” asked my new editor. “Scoop has been downsized. You’ll need to reduce your illustrations considerably. We’re taking it from 40 pages to 32, so you’ll need to get rid of several page spreads. Also, can you change the little girl to a boy? Girls don’t like trucks. And we must insist on Scoop having four wheels.”

I’ve always loved that Superman joke, the one where you see Superman leaping tall buildings, saving elderly ladies from bad guys, and stopping runaway trains. Then he turns to the crowd and says, “But I really wanted to write children’s books!” 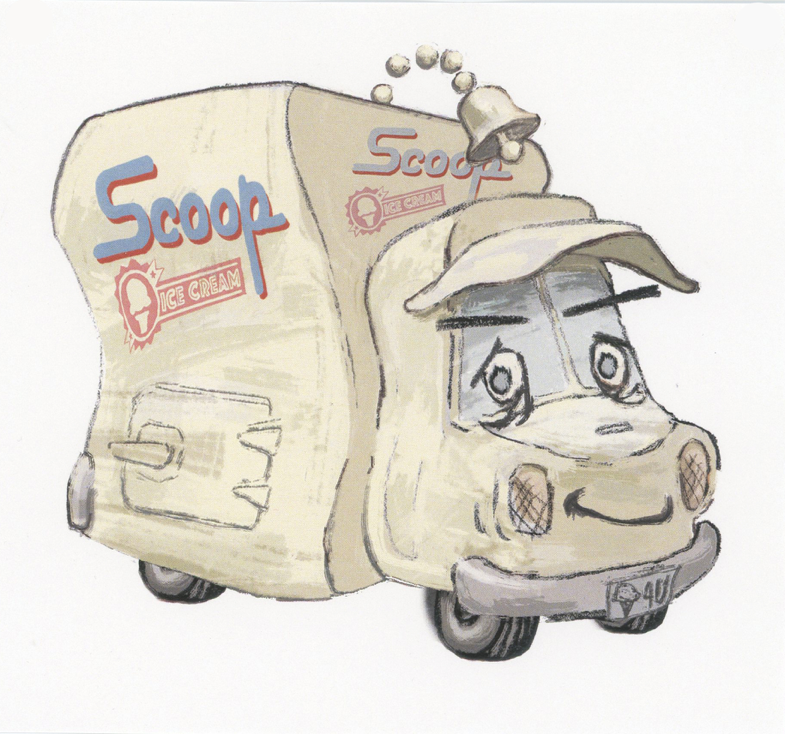 PATRICIA KEELER was awarded the Christopher Medal in 2010. She has taken first place for children’s book illustrations in the New York Book Festival and Purple Dragonfly Book Awards.

Patricia lives in Hoboken, New Jersey, where she looks out her window at the Empire State Building.