Interview with Jeanne Stanton, author of The Hairbrush and the Shoe 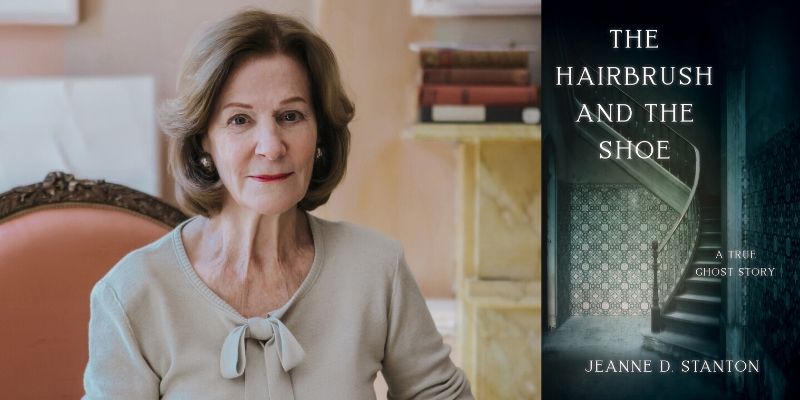 Jeanne D. Stanton lives and writes in an 1875 townhouse in Boston’s historic Back Bay. Formerly a faculty member at Harvard Business School and the Simmons College Graduate School of Management, her book Being All Things profiles women attempting to manage family and careers.

What do you hope readers will take away from The Hairbrush and The Shoe: A True Ghost Story?
Hopefully readers will enjoy as well as learn from my exploration of the supernatural and its associated history and sub-culture, including spiritualism and a long list of characters with alleged supernatural powers. But what I hope readers will carry with them is a curiosity about everything, a willingness to believe that there is much we do not know about the world we live and die in, and instead of just saying “that’s weird!”,  to stop and pay attention to events and phenomena that do not have ready explanations.

Why did you decide to include citations for your source material?
This is a record of a lengthy research project, and I have drawn on the experiences, writings, and research of many people, all of whom must be credited. And readers may be interested in learning more about the work of individual sources.

How did you remain steadfast in your investigation when faced with the implausible?
I stuck with my investigation because 1) I wanted an answer, and 2) I found the material so fascinating, a subculture I had known nothing about and which had a long and rich history (although I admit that my exploration of quantum physics was daunting). As in any investigation, the harder you look, the more you see, and as I studied the material I became more and more committed to my subject. In fact, it was hard to say “enough” and end my journey.

Do you believe recent conversations around the supernatural in the media are helpful or detrimental in the dialogue?
Conversations about the supernatural tend to be anecdotal at best and sensationalistic at worst, emphasizing the horrific and blatantly improbable. Newspaper accounts mostly feature the fraudulent, such as when psychics are arrested for duping clients. Records of scientific involvement can be factual and fair, such as the NYT coverage of how Dr. Darryl Bem’s experiments with ESP were ridiculed by his scientific colleagues; his subsequent appearance on Stephen Colbert, however, was scripted to be comedic. Books on supernatural topics often are packaged in a way that implies the subject matter is frivolous, even silly, such as covers using gothic lettering, images of skeletons, or cartoon ghosts. There are exceptions: Jim Harold’s podcasts, and books such as that by Stacy Horn given authenticity and heft to the subject of the supernatural.

The Hairbrush and The Shoe: A True Ghost Story feels so organic and natural, like a conversation with a neighbor over a cup of coffee. How did you maintain your authenticity throughout this query?
It was a treat to be writing solely about myself, in my own voice, knowing I could say whatever I wanted to say, freely expressing my stages of amazement, skepticism, frustration, and annoyance as I went, as well as my initial embarrassment that I was embarking on such a project in the first place. I hope the reader is right with me as I begin my fumbling journey, trying to find reliable information and thrilled when I find not only a whole new world but an entry into it via the Ghost Club. I make no bones about my inadequacy as a researcher in the area of science and my struggle to get my head around basic concepts in quantum physics. All along I am eager to share what I am learning about my subject, and increasingly determined to defend it.

Do you believe the scientific community will adapt or come to accept the presence and impact of the paranormal in time?
The scientific community is mostly consistent in its rejection of the paranormal. Exceptions are scholars like Dr. Jim Tucker at the University of Virginia, who has documented hundreds of cases of children who remember a previous life. While many scientists are religious, they tend not to integrate their scientific and religious beliefs, and they certainly do not acknowledge the paranormal cast of characters, i.e., ghosts, spirits, psychics, mediums.

What other fields, similar to the scientific community, should open themselves up to the possibility of the paranormal?
This is a hard question. For me “science” encompasses many fields, including medicine, biology, astronomy, neurology, fields that attempt to interpret behavior and the nature of the universe we live in. I can’t see the relevance to the applied fields such as engineering, business, government (although the US defense department did attempt to employ some form of telepathy at one time). And I believe that most areas of the humanities are there already, implicitly if not overtly, with considerations of such phenomena as time travel, transformation, and plain old magic a feature of many plays and movies.

How has The Hairbrush and The Shoe: A True Ghost Story resonated with readers?
My book has been wonderfully received by reviewers and readers – I only wish there were more of them! Reviews have been not just positive but perceptive and thoughtful. Many readers say they began the book without knowing what to expect and found themselves hooked. As one reader wrote me just this week, “I treat myself to a chapter each night and can’t wait to continue the next night.”

What do you hope to study next? Do you foresee another publication in the realm of the supernatural?
I have been working on a piece about the Empress Zita, the last Empress of the Austro-Hungarian Empire, who as a widow in exile immigrated to the United States with her eight children in the 1940s. She subsequently spent ten summers in a small village in rural Massachusetts. Several years ago we bought the house where she had stayed and I have been “haunted” by the seeming impossibility that serious European royalty, however penniless, once inhabited our modest colonial-era house. How did she get there? What was her life like? And how was she regarded, in her long black mourning costume, by locals she greeted each Sunday at St. ____ Catholic Church?

Has this inquiry opened you up to other supernatural entities? Angels? Fairies? Demons? As they are described or as you understand them.
Several people I interviewed during my research described entities that had to be demons. Further, as I state in my book, I firmly believe in my own guardian angel. “Fairies” are a bit of a stretch, as I think of them as more folkloric, and my interest is in entities connected to humans and their realm.

Read our review of The Hairbrush and the Shoe here.